Columbus Regional Healthcare System and Network are taking all the precautions to ensure you receive COVID-safe care.
Learn More >

Columbus Regional Healthcare System offers lung cancer screenings for early detection of lung cancer for individuals with a high risk of developing the disease, including those with a history of cigarette smoking or exposure to lung cancer-causing agents.

Get directions to the Donayre Cancer Care Center.

You Do Not Need Screening, if:

Who Should be Screened?

(Eligibility criteria for most insurers)

You should be screened if:

CT Lung Screening  does involve radiation exposure, but the value received from an accurate diagnosis far outweighs any risk. The effective radiation dose from the procedure is 1.5mSv, which is equivalent to the radiation that an average person receives from background radiation in 1.5 years. If a nodule is detected, a follow-up CT scan may be indicated.

Results from a National Lung Screening trial indicated 20% fewer deaths among current and former smokers who were screened with a low dose spiral CT, over a chest  x-ray.

It is estimated that over 80% of lung cancers could be cured if detected at an early stage.

Lung cancer is the leading cause of cancer deaths in both men and women in the United States, more than breast, colon and prostate combined. 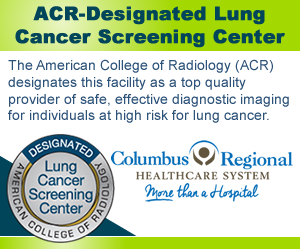